Subtly deployed on the plot at Saco do Mamanguá, in Paraty, – a tropical fjord with access only by boat – the project is a refuge in the forest. In this context, the disposition of the volumes was determined by the position of the trees and untouched vegetation of the Mata Atlântica.

With natural preservation as a priority, the proposal was to divide the construction into three volumes, following the perimeter of the buildings previously existing on the plot: a boat garage, close to the water for entry; the Cabana (portuguese word for cabin), on a higher level, privileging unobstructed views; and finally, at the bottom of the land, a caretaker’s house and technical areas. The former and the latter were requalified from the original state they were found.

Built on the perimeter of the old construction, the main volume has just the essentials: a balcony, kitchen, bathroom and bedroom. Here, the most important thing is the natural space, and the construction is only a support.

In logistical issues, since the land was remote and only accessible by small boats, we opted for light structural systems and parts with small dimensions. With this in mind, Glued Laminated Timber (Glulam) was the material adopted for the structure, while for closings, modular panels composed of painted navy plywood boards, all with commercial dimensions of the boards and with apparent wood joints. This approach allowed easy transportation and the construction site to act as an mounting system, ensuring speed, low environmental impact and higher quality of parts.

Projectually, the residence is very simple: a wooden deck, a large eave supported on slender pillars of circular section, and a linear wall cutting its length, which in turn, protects the kitchen and suite.

The social area is actually a large balcony, open, connected to nature, sometimes protected by the canopy of trees, sometimes catching sight of the sea between the leaves. At the perimeter, a wooden bench plays the role of guardrails. This space has awnings as the only closure. At the back, the service and private areas receive modular panels that delimit the space. The doors and windows also function as panels, aligned with the partitions and with exposed solid wood uprights.

In the spacing between the beams, hatches were installed, allowing the breeze to flow through the space when opened.

Due to the fact that the place does not have infrastructure for electricity, it was decided to install an energy generator, arranged next to the caretaker’s house, as a technical area. The water is collected from the source of running water. The shower is heated by gas. 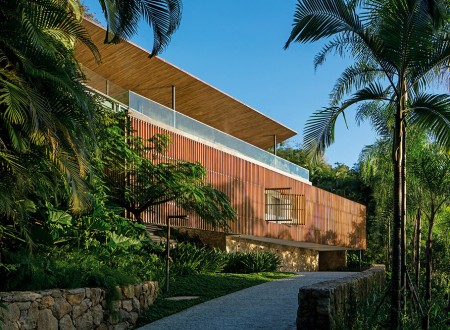 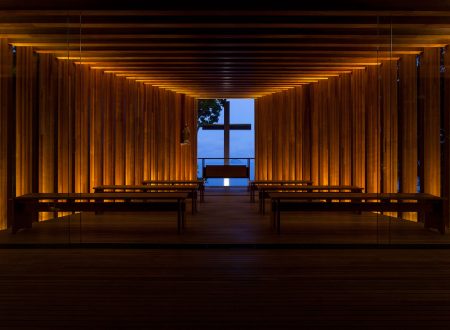