The Vila Nova Conceição Building project came to the office at the invitation of an entrepreneur with the desire to materialize an office building going beyond the traditional corporate towers, promoting a closed competition between different architectural offices. The architectural object should meet the needs of the work areas and promote quality spaces for the professionals, to be built on a corner lot in the neighborhood of the same name and close to parks, universities and important commercial streets.

Seeking to meet the demands requested and create a fluid structure, this building was designed from a constructive system in laminated wood with a base for commerce (two floors), offices (six floors) and terrace.

The commercial gallery on the ground floor allows the building to have an active façade – an urban instrument in São Paulo city for occupying the façade located in the alignment of public sidewalks for commercial use with open access to the population – connecting the two streets through a diagonal path. Above this floor, a mezzanine is proposed, which stands out on the south façade by its polycarbonate wrapping. The first floor, in turn, would be destined for a restaurant with about 50 seats for the use of visitors and workers, while part of the slab would become a raised square with direct visual connections to the horizon and the lower floor through openings in the surface.

The six office floors have a rectangular floor plan, 27.5 meters wide and approximately 22.5 meters deep, so that the diagonal east end is transformed into a balcony. The structural wooden grid on the perimeter of the façade follows a modulation of 2.5 meters covered by glass and the face of the balconies does not receive the material directly on the exoskeleton, but on the slab, from floor to ceiling.

The vertical circulation core (with stair and three elevators) is located in the south portion, close to the toilets (male and female) with four cabins each. Crowning the building is a terrace with closed and open areas for the workers. Three basements accommodate the garage 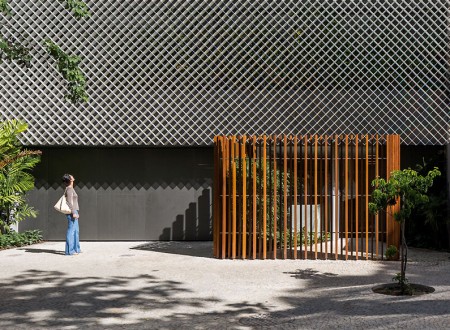 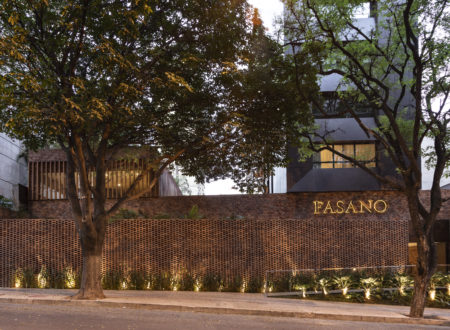