Delicately landed on the 525 square meter trapezoidal plot on the corner of Pascoal Vita and Napoleão Laureano streets, in Vila Beatriz neighborhood, in São Paulo, next to Alto de Pinheiros neighborhood, Pascoal Vita Building has privileged views of the city.

Taking into account the strategic location of the land and the legislation of the neighboring neighborhood, strictly residential and of low height, the building takes advantage of the unobstructed view to the west, concentrating the social areas of the units, which are protected by automated translucent shades with a wind sensor, which can be opened or closed by residents. This solution allows future residents to visually enjoy not only the intense green that characterizes this region, but also from more distant neighborhoods, such as Morumbi, Butantã and Jaguaré.

With a horizontal base made up of four floors – two above street level – and a small main tower with seven floors and a terrace, in 7,884 square meters, twelve housing units are distributed between the second and ninth floors – two per floor – of 319 to 443 square meters, and four of them are duplex. All units are equipped with private access and entrance halls.

In the first of the three garage basements, there are twelve individual workshops for each one of the apartments, in addition to a support area, technical areas and stairwells and elevators. Raised for greater privacy and better use of the view, on the ground floor are the leisure areas: gym, sauna, spa and swimming pool with a 25-meter streak with skylight for zenith lighting. The three closed blocks receive translucent polycarbonate panels and coumaru wood slats.

The volumes and flowerbeds of the landscaping follow fluid lines as opposed to the lines of architecture. A garden terrace with a wide variety of species on the first floor expands the amount of green and leisure areas of the development.

On the second floor, there is the first floor of two of the duplexes, with an extensive C-balcony that surrounds the units, which in turn is responsible for generating a certain aesthetic lightness for the facade when viewed from the street. These units have the smallest apartment on the south side, with two suites, so the largest is on the opposite wing, with three. On the type floors, four and five suites respectively, one of which is for service. The penthouse duplex apartments follow the same number of rooms as the lower duplexes, with slight variations in the plan, in favor of the access stair to the terrace equipped with barbecue grill, gourmet area and private pool.

With all the apartments facing the west, this condition allowed a maximum use of the skyline perspective to each of the units, since the social areas, comprising a terrace, living, dining room and kitchen, arranged linearly and in a straightforward manner, mirrored in relation to each floor, they look precisely over the three facades, having as extremes the trapezoidal perimeter terraces, defined on the front facade by acute triangles and on the posterior facade by obtuse triangles.

On the facade, sliding glass sheets, together with small frames fixed at the bottom and low walls of 53cm high masonry, create bulkheads for the installation of metal planters with a light gray finish, which come from automatic irrigation and drainage. These are embedded in the modulation of the window frames, which in turn provide a welcoming relationship with the surroundings of the neighborhood. On the other hand, the exoskeleton in dark gray tone, gives striking features to the visual language of the enterprise. 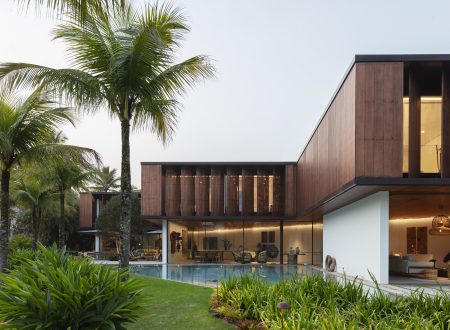