Located on a plot of irregular pentagonal design in Urca, a predominantly residential neighborhood in the city of Rio de Janeiro and popularly known for the natural complex of the Pão de Açúcar hills and another one with the same name as the neighborhood, this building with nine apartments is proposed from ground floor, four floors and coverage distributed in 2,700 square meters.

Seeking the best use of areas, the architectural proposal took advantage of the rates – of occupancy, height and setbacks – required by the Rio de Janeiro city hall, creating an offset from the perimeter of the land to the design of the implantation. From this, the sectorization of each of the housing units by floor was defined, the first being with the living and intimate zones to the east; and the second with living spaces to the east and bedrooms to the west, prioritizing the late afternoon sun.

With the reduced size of the land and the lack of underground pavement to accommodate the parking lot, the central core of the ground floor follows the same perimeter as the implantation, but indented, and its vertices are diluted in curves. In turn, these setbacks provide structural balances and only two front pillars are visible from the sidewalk, while the others are mimicked between the interior walls. This solution, added to the free areas resulting from the building’s setbacks on the land, creates space for 17 parking spaces. The eaves also protect visitors from the direct sunlight and rain.

Lobby, vallet’s living, vertical circulation centers, storages (building’s, personal and garbage) and technical area are organized in the trapezoidal volume and the access of the last two is carried out from the outside for better use of space.

Each of the four type floors has two residential units. With the main façade facing southeast, its share it, with an L plan respectively, where the social area of both and the single suites of the first unit receive sunstroke during most of the morning, and the double suite facing west, with sun in the afternoon, as well as the other bedrooms in the second unit.

Each apartment has a ten meter long balcony. In plan, the front portion has a mirrored design, accommodating the living and dining room, kitchen, laundry and gourmet area. In the rear portion, due to the irregularity of the lot, there are three suites – master and two single –, and in each unit, one has a private balcony. Focusing on the views, one of the sides faces the Pão de Açucar hill; and the other to Botafogo Bay and Corcovado.

Crowning the building, the penthouse apartment, with the same perimeter as the other floors, has a different layout and the balcony slab is indented in the front and sides, generating solariums and a certain visual lightness when viewed from the street. Living and dining rooms are positioned in the central area and integrated with leisure and outdoor dining space arranged at the ends, through the C-shaped balcony. In the eastern area, there is the kitchen, laundry, bedroom and service bathroom. In the transversal area to the west, four suites, two of them with a double bed and the others with two single beds each. The largest bedroom is equipped with a closet and a balcony.

Bernardes adopted a silent approach to the project and as one of the strategies, on the perimeter of the entire building, flower boxes give green to the façade, which will grow over time together with vertical louvers in slatted wood that act as a veil, protecting from the sun’s rays directly, while it also contributes to the project’s identity. 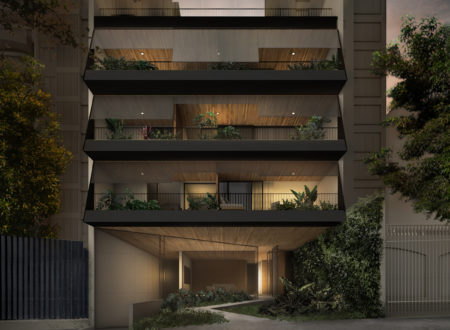 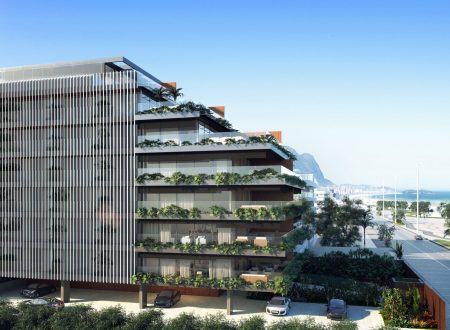 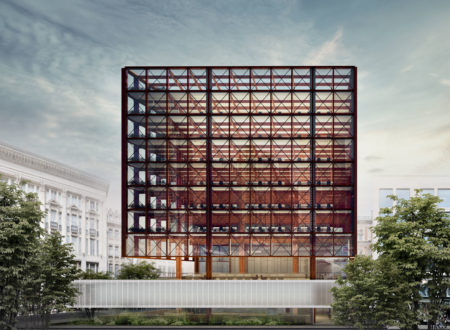